Roommates can be troublesome. Just look at poor Sheldon here. He spends an entire night to give Penny some room in the Roommate Agreement, only to realize that Leonard and Penny have parted ways, yet again. Imagine, Sheldon Copper gives up on a whole night’s sleep to be accommodating and all that comes his hands, is disappointment.

Taking inspiration from Sheldon’s agony, I am going to unveil my roommate experiences.

The One With Sherlock Holmes Syndrome

She was the one with questions, well a lot of questions. When did your classes get over? Why have you come back so late? How much did you score last semester? Why did you extend your stay back home? Why did not you have dinner? Why do you wash your hair so often?

She was always keen to put me under the scanner. I think her queries exceeded the number of questions my parents had asked me in my entire life.

The one who wanted to be just like me

This one was a year younger to me. I helped her getting acquainted with the place. Gradually she took a liking to me and before I realized she started picking plenty of my habits. It started with the television shows, then she started using the same hair products, picked very similar footwear, developed her taste in food to match mine and like that I was stamped all over her life. She would ask my opinion on a number of things and then present it to others as her own. I became so confined in her presence, conscious of everything that I did and spoke about.

I have a slight OCD about cleanliness. With a stroke of luck, I once shared a room with a girl whose entire existence was sloppy. Even her aura seemed unkempt. She was the one who went days without bathing or brushing her teeth. Her cupboard remained open at all times making it convenient for her to pull clothes from or throw them in the jumbled clothes pile right from her bed. Once in a week, she would return drunk out of her senses and crash right into the bed. The room just stank for months. 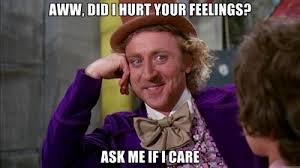 There are times when you look at a person for the first time and you know that things can always turn nasty with them. That is what I felt when I first met her. However not trusting my better judgment, I became friends with her. In retrospect it looks like such a disturbing time. I remember being subtly coerced into buying things I did not want, doing things I did not enjoy and eating the same food I had long outgrown of. With her everything – the dysfunctional WiFi, the lazy maid, annoying neighbors- was my fault. One morning things were merry between us and on the other she would not even bother to spare a glance at me. She had the ability to make me feel guilty for any delightful experience that I had without her.

There was a halfhearted feminist who solely needed to date a guy to flatter her subdued ego and the cold shoulder trio who made me feel unwelcome in a room that was costing me twelve thousand rupees a month. Tch roommates!